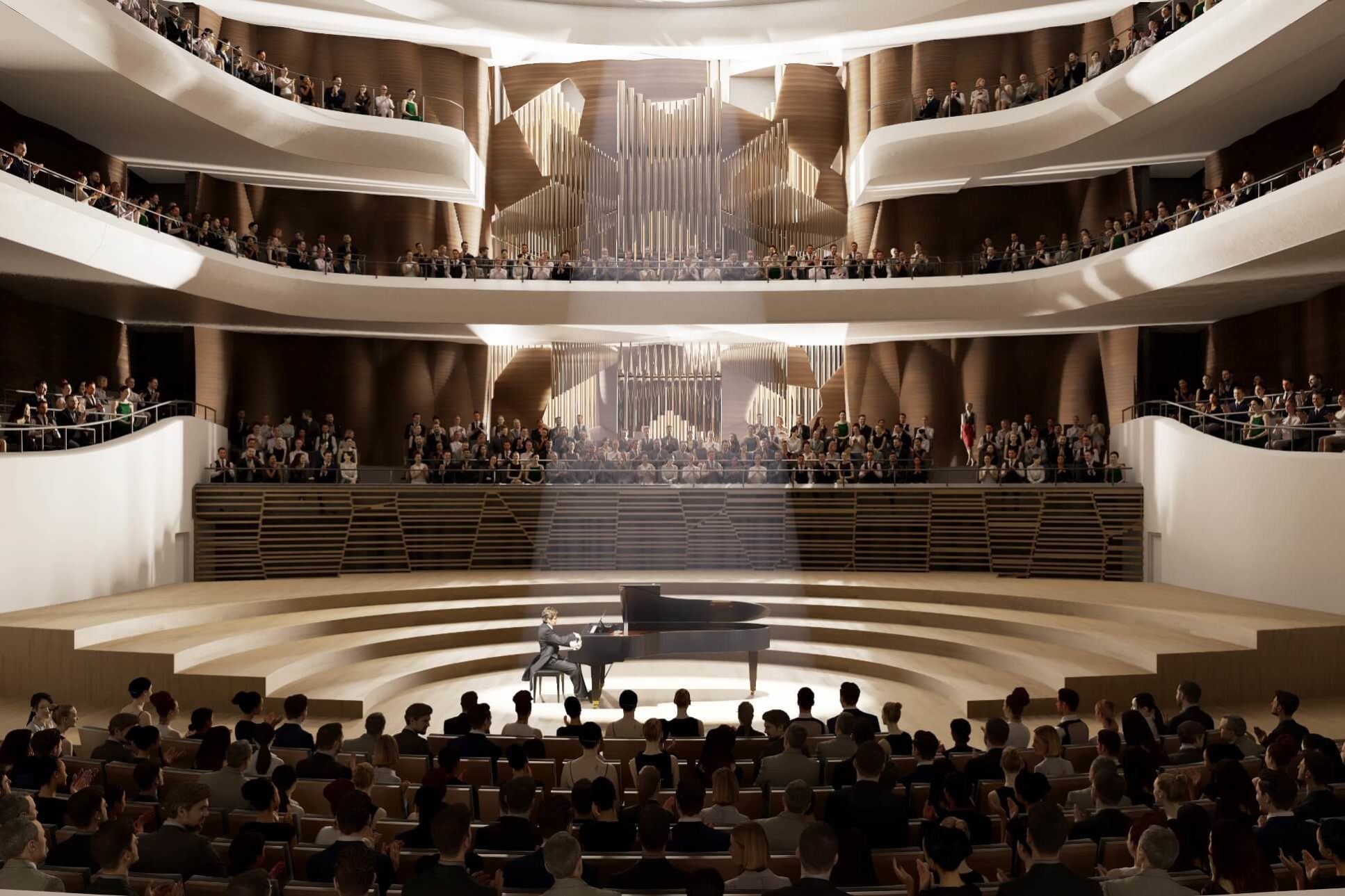 Rehearsal rooms, stores, a recording studio, tuning rooms and dressing rooms for the musicians, a box office, café and other facilities for visitors, and in particular a modern concert hall with the perfect acoustics. The Janáček Cultural Centre will be all this. The city is another step closer to its construction – Phase 2 of the project, following on from the already-completed underground garages, has received final planning permission.

“I personally consider the Janáček Cultural Centre project to be one of the fundamental matters we want to concentrate on during our council term. The acquisition of planning permission has opened up the path to the next phases of preparation and brought us closer to what our city and region has been waiting for over many years – that we will move on from visualisations and administration to actual construction. I hope it will all run smoothly and we will begin construction work by spring 2022 at the latest,” says Mayor Markéta Vaňková.

“I’m glad that the South Bohemian Region is taking an active role in completing construction of the Janáček Cultural Centre. Not just due to the legacy of this musical great, but especially because through this our Region will gain appropriate facilities for major world-class music events,” says South Moravian Region Governor, Bohumil Šimek.

“For many years, the Brno Philharmonic has been one of the most visible representatives of Brno culture, and it is an important piece of the diverse musical tapestry which brought Brno the title “Creative City of Music”. But the full orchestra – which comprises over a hundred people – cannot even fit on the stage of Besední dům, where it is based. As such, I consider a worthy concert hall is a clear priority and the city’s most important cultural investment this decade,” says Deputy Mayor for Culture, Tomáš Koláčný.

“The construction of the Janáček Cultural Centre is also related to the problem of the nearby International Hotel transformer substation, which the city has been trying to acquire for over 15 years in order to get rid of it. Following a number of difficult meetings, we managed to come to an agreement with the hotel owners on an assets settlement whose technical details are currently being fine-tuned, and which will be submitted to city authorities for a decision over the course of the summer holiday, if everything goes according to plan,” says council cabinet member responsible for property, Róbert Čuma.

“On Tuesday, we received affirmation from Minister Zaorálek that despite austerity measures, the state still plans to co-fund the project to a total of 600 million crowns. Documents for construction of the building should be ready in 11 months. Over the course of this year, an acoustic model of the hall will be produced under the guidance of world-renowned acoustician, Yasuhisa Toyota, which will be incorporated into the implementing documentation. We will subsequently issue a tender for a contractor,” adds council cabinet member responsible for culture, Marek Fišer.

The New Hall for Brno, as the project is also referred to as, will have six above-ground storeys. “The entire building will build on the already completed underground garages containing 170-180 parking spaces. You will be able to go from the garages directly to the JCC foyer. In addition to the concert hall itself, whose auditorium holds 1100-1200 people, visitors can also enjoy a café, while the area for employees will mainly comprise rooms for musicians for tuning their instruments and dressing, as well as a recording studio, rehearsal rooms, stores, etc.,” says design team representative, Petr Hrůsa.

“The fact that the Brno Philharmonic and its audience are in dire need of a concert hall of worthy quality and capacity is evidenced by the fact that the project has been supported for many years by city leaders across the spectrum of political parties. After the years of preparations which such a demanding building requires, we have reached the stage where the building is now literally in sight,” adds Brno Philharmonic CEO, Marie Kučerová.

The new concert hall shall take shape on the corner of Besední and Veselá streets. A new public space will be created in front of it, which Brno-střed district council has recommend naming Ludvík Kundera Square after the Brno pianist and musicologist, Leoš Janáček’s pupil and the first rector of the Janáček Academy of Musical and Performing Arts. The proposal has been approved by Brno council cabinet, and it will be submitted to councillors next week.

The leaders of the Statutory City of Brno endorsed the construction of a concert hall in Brno City Cabinet’s policy statement for the 1998 to 2002 council term. In 2002, an open public international architectural competition was declared. Of 80 participants, an international panel unanimously chose the design by authors Jakub Havlas, Jan Hájek and Pavel Joba from the M1 architekti studio.

For financial reasons, the preparation and implementation of the entire JCC project was divided into two phases in terms of material and time, specifically the construction of the three-storey underground garage structure for 191 vehicles (Phase 1) and construction of the above-ground six-storey building incorporating the concert hall and operating areas for the hall (Phase 2).

Planning permission for Stage 1 was granted in 2014 with construction beginning in February 2015. The investor is Brněnské komunikace (“BKOM”). The building shell is currently completed, and the entire structure will be completed alongside completion of Phase 2.

In 2018, a contract for completion of design documentation and design supervision was signed with a team comprising Tomasz Konior (general designer), Yasuhisa Toyota (chief acoustician) and Petr Hrůša (structural designer).

Filharmonie Brno will resume live concerts next week, with two performances every day from Tuesday to Friday, after kicking off the week with a concert on the roof of Trznice on Zelni trh on Monday.
19. 5. 2020

Filharmonie Brno To Perform From The Old Town Hall Tonight, and In Zelny Trh On May 25th
12. 5. 2020
Upcoming concerts
Current Month