Janáček Cultural Centre: All parties agree on an amicable settlement 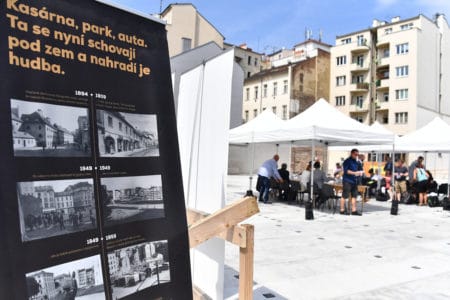 Construction of the Janáček Cultural Centre was complicated in autumn last year by a lawsuit placed by the M1 architekti studio. They claimed that the design team of Tomasz Konior, Yasuhisa Toyota and Petr Hrůša, who are providing documents for planning permission, unduly infringed their copyright. A way forward to an amicable settlement was found with the help of city leaders. Brno City Cabinet today submitted a Settlement Agreement to the council for approval.

“The Settlement Agreement enshrines key principles which further construction preparations shall be governed by. This is based on the project respecting the JCC appearance which won the architectural competition, and being in accordance with the zoning decision and licence agreement. Any improvements in terms of quality of the hall and building itself will be dealt with by the designers alongside the original authors,” says Brno City Mayor, Markéta Vaňková.

The Settlement Agreement has already been signed by M1 architekti studio representatives. Today, the city cabinet recommended that the council approve the agreement. The document has today already been approved by the Brněnské komunikace Board of Directors. Once the agreement comes into force, the applicants will withdraw the entire lawsuit.

“I am very pleased that we managed to negotiate conditions which from our perspective incorporate three fundamental points,” says council cabinet member for culture, Marek Fišer, specifying: “Cutting-edge acoustic quality of the hall including the audience’s view of the stage remain a priority, with the original authors helping to find a suitable architectural solution such that the audience’s view is not restricted by columns. A technology centre will also be positioned below ground outside the building and there will be improved conditions for new planting of greenery in front of the Janáček Cultural Centre.”

History of the JCC project:
For many years, the city has strived to build a high-quality concert hall for the Brno Philharmonic. In 2002 they declared an open public international architecture competition. Of 80 participants, an international panel unanimously chose the design by authors Jakub Havlas, Jan Hájek and Pavel Joba from the M1 architekti studio.

Phase 1, i.e. the construction of three storeys of underground garages, which also included structural and static preparations for Phase 2, took place in 2015–2017.

A tender was announced in 2016 for construction planning permission and design documents for construction for the second phase of the JCC, i.e. the above-ground construction including the concert hall. The city required in the conditions of the competition that the team could demonstrate implementation of a successfully-completed concert hall of similar parameters, and that the team must include an acoustician who has done at least three such halls. Another condition was in regard to length of experience with buildings of a similar size in a conservation zone. Two of the four teams who applied passed the qualification round, with the team comprising Tomasz Konior (general designer), Yasuhisa Toyota (chief acoustician) and Petr Hrůša (structural designer) winning the competition round. This team of designers presented their proposal for the concert hall’s possible appearance in September 2018, although this differed from the original architectural design produced by the M1 architekti studio, and it was not in accordance with the parameters given in the zoning decision.

A few days later, the M1 architekti authors sued the city for infringement of copyright from the concluded licence agreement. The city’s new leaders emerging from the October 2018 election began negotiations with them, leading in February 2019 to a list of conditions under which M1 architekti studio was willing to withdraw the lawsuit. This has resulted in today’s discussed Settlement Agreement.

Last large concert of this season. Schubert and Wagner: Romanticism from beginning to end
30. 5. 2022

Angels of Sorrow: Spiritual Concert To Take Place This Thursday And Friday at Besední dům
24. 5. 2022

More information can be found here.