Filharmonie Brno to stage more concerts than ever before in its 66th season, with a fully-fledged repertoire prepared with no pandemic compromises. 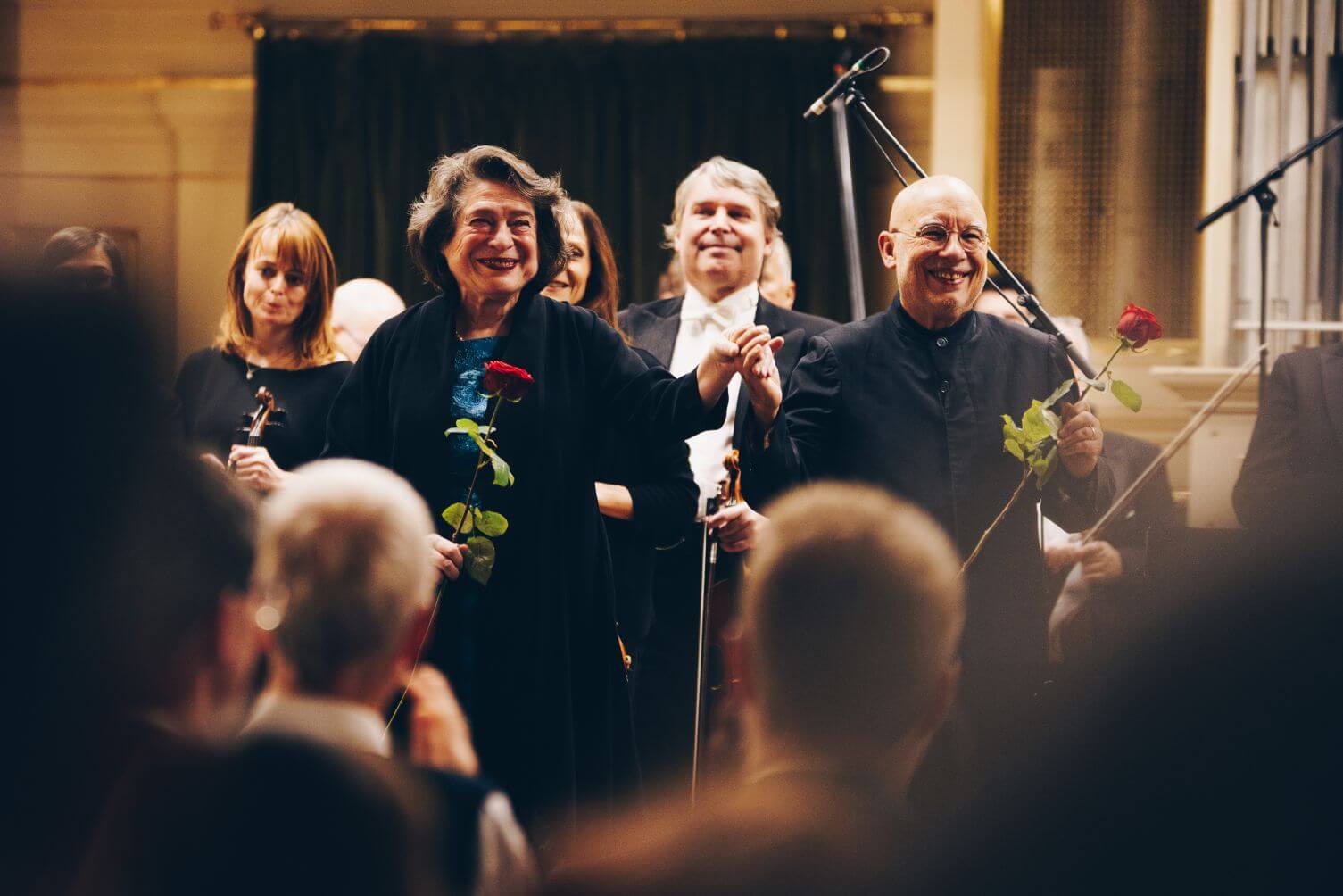 A year which has affected every single person in a way nobody could ever have previously imagined. A world which has been turned upside down in so many regards. At a time when we appear to spy light at the end of the tunnel, Filharmonie Brno is unveiling its 66th season. It carries with it the consequences of all of the above: the repeated, or more precisely postponed, first performances of certain projects and concerts, uncertainty regarding auditorium capacity, concern over whether worry or the desire for live music will prevail amongst our audience, and above all our great desire to meet up again. None of the restrictions, however, have impacted the planning of the season in terms of making compromises in regard to artistic and dramaturgy demands and intentions, combining the already played and the newly planned, or in cancelling projects under way. Thus, Filharmonie Brno is unveiling a fully-fledged and compromise-free programme for the next eleven months.

The orchestra will be staging more concerts than ever before during the upcoming season. “Based on feedback and response, we can see that the desire to listen to live music has gone up significantly after more than half a year without it. I must say this is true not just for our audience, but also for our musicians. That’s why we have prepared more concerts and also launched a new chamber evening subscription,” says Filharmonie Brno Managing Director, Marie Kučerová. Stars who have enjoyed extraordinary success amongst the audience are returning to Brno – including Elisabeth Leonskaja, Martina Janková, Maki Namekawa, Matt Haimovitz, Emanuele Arciuli and others… Artists co-operating with the orchestra for the first time will also be performing: world-renowned violinist Arabella Steinbacher, composer and conductor Joe Hisaishi who will be conducting his own work, Berliner Philharmoniker oboist Dominik Wollenweber, bassoonist Guilhaume Santana and legendary jazz pianist Brad Mehldau.

Brno Filharmonie Chief Conductor Dennis Russell Davies perceives the upcoming season with a particular focus on some important aspects. We as an orchestra with a tremendous organization behind us are dedicated to two important, even vital, responsibilities: Firstly, the preservation and expansion of our great classical music tradition, and secondly, to make the live performances of this music available to the widest possible audiences. These ideals have motivated and guided us during the past year as we have navigated through hard choices involving how to maintain the integrity of our work while keeping our audience, musicians, and staff as safe as possible,” says Davies.

As a result, amongst other performances audiences will finally be able to enjoy Wagner’s The Ring Without Words alongside Schubert’s Unfinished Symphony, Kabeláč and Shostakovich’s Fifth Symphonies, and a Michal Nejtek world premiere, a programme incorporating works by Respighi, Rautavaara and Mendelssohn and a concert originally planned for the sixtieth birthday of conductor Leoš Svárovský (Berlioz, Weber and Roussel).

As is tradition, a range of music proven over the centuries has been prepared alongside contemporary works. The orchestra will be returning to celebrations of the anniversary of Beethoven’s birth, for example, honouring him through composers inspired by Beethoven: Liszt, Hindemith, Franck. Some of the classical composers we will be performing include Schumann, Brahms, Berlioz, Mahler and Mozart. The season will begin with a classic of national classical music: Smetana’s Má vlast. More recent works will be represented by Sumera, Vasks, Jan Novák, Kančeli and Bernstein amongst others.

“As programme organiser, I have always enjoyed looking for connections not just within individual programmes, but also across the entire season – between concerts, series and festivals – and even between seasons. This is how two programmes communicate together for example, when always incorporating one Brahms piano concert combined with one of the early symphonies – the Second or Fourth – of Brahms’ friend and philosophical kindred artist, Antonín Dvořák,” says Filharmonie Brno Programme Director, Vítězslav Mikeš. He says that two Beethoven concerts recall each other in a similar way: “Honour Beethoven’s” at Janáček Theatre, and the performance of the Violin Concerto by Beethoven himself at Besední dům a week earlier.

“I’m personally most looking forward to Elisabeth Leonskaja, Martina Janková and Brad Mehldau. Also to Lautching the Season with Má vlast and The Ring Without Words,” says Kučerová. Davies usually doesn’t like to say what he is most looking forward to, but this time he is clear. “To the audience. Definitely,” says.

With the Czech premieres of pieces by Lithuanian composer Kutavičius, Latvian composer Vasks and Estonian composer Sumera, Filharmonie Brno is professing to its tradition of performing works by Baltic composers. Similarly, it is performing Jan Novák, an author closely linked to Brno for whom celebrations of the 100th anniversary of his birth will reach a climax at this year’s Moravian Autumn festival. “Frequent visitors to our concerts are also sure to register that we are continuing in our performances of the works of Alfred Schnittke – by performing his Faust Cantata “Seid nüchten und wachet…” we are commemorating the fact that it was when playing this piece four years ago at Prague Spring that the orchestra became acquainted with its current Chief Conductor, Davies. In a nutshell: we are inviting you not just to savour the experience of our individual concerts, but also to experience the adventure of the discovery tour called the Brno Filharmonie 2021/22 Season,” adds Mikeš.

Besides concerts, Brno Filharmonie will also be significantly building on its educational activities for children, schools, young professionals and adults. Its holiday workshops will be complemented by joint events for children and parents, programmes and concerts for schools and masterclass courses, as well as educational courses for adults. “Behind us is a year in which we met up with children five times a week in the on-line space, and so we are really looking forward to meeting up in person,” says Filharmonie Brno’s teacher for educational activities, Kristýna Drášilová.

The orchestra has also undertaken many international guest spots in prestigious halls in Austria, Germany and Poland. “We trust that we will be setting out on our big autumn tour of Great Britain, during which we will be performing the work of mainly Czech authors, Janáček, Dvořák, Martinů and Korngold, at nine concerts in nine cities,” says Orchestra Manager, Pavel Šindelář.

The launch of subscription ticket sales begins on 7 June, both in person and online. Places for subscriptions not renewed will be released two weeks later, i.e. on 21 June, when music lovers can also purchase tickets for individual concerts and festivals, plus the popular Season of Your Choice ticket where subscribers are able to set up and choose their own portfolio of concerts to attend.

THE AUDITION for THE POSITION OF SECOND CLARINET WITH E FLAT CLARINET DUTY
27. 1. 2023

Filharmonie Brno Will Perform In Leipzig To Celebrate 50 Years of Twinning Agreement
23. 1. 2023

Filharmonie Brno is setting off on an American tour. They will play the New York premiere of Glass‘ Symphony No. 12, “Lodger“ in Carnegie Hall, with the author personally participating
6. 1. 2023

let me tell you