Characteristic trait? Duality. Combining two structures in a single house. One of them is massive, enclosed and subordinate to music. The second is transparent and open to people. This is how Tomasz Konior, general designer of the team that has worked on the design of the building since January this year with the acoustician Yasuhisa Toyota and architect Petr Hrůša, talks about the project for a new concert hall for Brno. He presented the results of his work today, first to the orchestra and staff of the Brno Philharmonic, and later to representatives of the city, the region, the Ministry of Culture, other institutions and the media.

The new concert “Hall for Brno” is one of the city’s strategic projects. “Brno won the title “City of Music” at the end of last year and joined the UNESCO Creative Cities Network. I’m glad we’re getting close to paying off the debt I feel comes with this title, and that means building the as yet missing top level concert hall. The musical and cultural credit of our city will thereby increase again, and I believe it will attract visitors from a broad neighbouring area,” stated Mayor of the Statutory City of Brno, Petr Vokřál.

“We have made another important step forward in the construction of a new concert hall, which, as I am now firmly convinced, will soon be erected in Brno. I am happy to see that my hometown will actually enjoy a top cultural venue, which together with the title “UNESCO City of Music” will raise it to the ranks of the European musical metropolises,” commented the patroness of the Hall for Brno, the mezzosoprano Magdalena Kožená.

The design team, which signed the contract with the city on January 15 this year, briefed today’s audience in Brno on its vision of the Janáček Cultural Centre and presented visualisations of the project design. “The proposed concept is the result of several months of intensive work of the design team and a number of working meetings. I am pleased that the Chief Conductor of the Brno Philharmonic, Dennis Russell Davies, also intervened in this creative process, as he has experience with concert halls all over the world, and recently attended the opening of a new opera house in Linz, Austria. What now is rising in Brno is a completely unique building that stems from the spirit of the city; I hope the orchestra and all Brno’s people will take it as their own,” stated the Brno Philharmonic Director, Marie Kučerová.

According to the general designer Tomasz Konior, aside from the already-mentioned duality, another characteristic trait of the building is its multilayeredness, allowing comfortable movement among the floors and consistent shaping of the structure of the building. “The key issue, of course, is the heart of the whole building – the concert hall. We designed it for approximately 1300 listeners, and the big stage provides almost unlimited options for the orchestra line-up, ranging from solo recitals and chamber concerts, through numerous large symphonic arrangements, to compositions where a choir is also engaged”, emphasised Tomasz Konior.

He pointed out that the team had completed the first stage of its work – the concept. It will continue to evolve according to, for example, planning limitations or legal requirements that will determine the final shape of the house. “I admit that the plot of land available in Brno was a challenge for us, as it is relatively small. However, we always try to turn constraints into benefits and let ourselves be guided mainly by our experience and proven practices,” Konior remarked, stating also that his goal was the designing of buildings that match the spirit of the times without having to be original at any cost, while at the same time not being burdened by the complexes of the past.

“Thanks to the Janáček Cultural Centre, Brno’s people will have the opportunity to hear Janáček’s symphonic compositions in truly top quality for the first time in history. In addition, the Brno Philharmonic will not have to be squeezed into inadequate rooms, but it will get the full-fledged service background that this music body of world format truly deserves,” added Deputy Mayor for Culture, Matěj Hollan.

About the project “Hall for Brno”

The title Hall for Brno (the working name for the Janáček Cultural Centre) hides in itself a project for the construction of a new concert hall in the vacant lot between Besední and Veselá Streets, in the immediate vicinity of the Besední dům concert house. It will become home to the Brno Philharmonic, whose more than a hundred-year-old ensemble nowadays plays and rehearses in inadequate conditions. The complete orchestra line-up will not even fit onto the stage of the Besední dům where the Philharmonic is currently housed. And the Janáček Theatre, where the Philharmonic often gives concerts and which moreover is closed now, does not have satisfactory acoustic conditions. Hence, the audience does not know what the Brno Philharmonic really sounds like. “Thanks to this new hall, audiences will finally appreciate the qualities of the orchestra and I believe that Brno will also attract leading foreign performers, who we have nowhere to invite to nowadays,” said the Director of the Brno Philharmonic, Marie Kučerová. The hall is supposed to be the most modern building of its kind in the Czech Republic. It offers a capacity of around 1300 listeners and acoustics to world parameters. At present, the shell construction of the first stage – underground garages for nearly 200 cars – has been completed. The garages will open after the completion of the whole structure above ground. 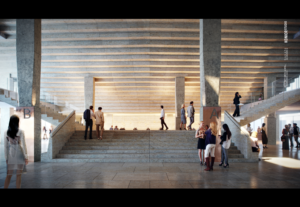 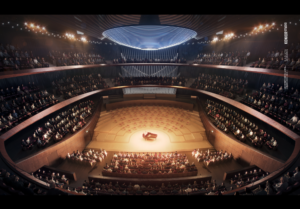 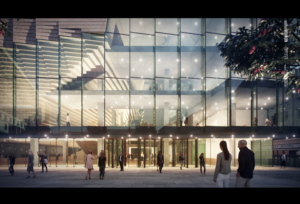 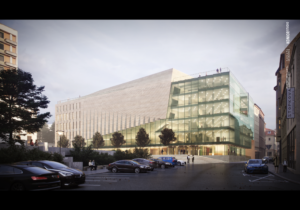 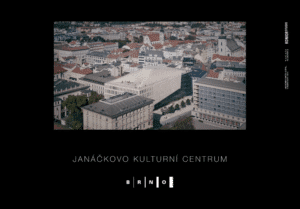 On the Hall for Brno design team

general designer of the team

. Founder, owner and main architect of the company Konior Studio

. Architect of the internationally acclaimed concert hall in Katowice, Poland

main acoustician of the team

. director of the US subsidiary of Nagata Acoustics, founded in 1971

. the company designed over sixty concert halls around the world; Mr. Toyota was the chief acoustician of fifty of them

. among its most acclaimed halls are the Walt Disney Concert Hall in Los Angeles, the Suntory Hall in Tokyo, the Helsinki Music Centre, recently the Elbphilharmonie Hall in Hamburg, and now he is in charge of the refurbishment of the Sydney Opera House

. he was also the main acoustician of the hall in Katowice, on which he collaborated with Tomasz Konior

. Yasuhisa Toyota’s extraordinary abilities were demonstrated by an event that happened at the Walt Disney Hall, on which he had collaborated with Frank Gehry. The orchestra was rehearsing for a gala concert for the opening of the new hall; in the deeper tones they thought something was wrong – the sound was not the way it should be. So they invited Mr. Toyota and he sat in the auditorium and listened for about an hour to what the musicians were playing. Then he stood up, pointed to the ceiling and said, “Replace this board and the board over there in the back.” Later it turned out that the two wooden boards had a different density to the others.

designer of the construction part

. holder of many prestigious architectural awards

. author of significant Brno buildings such as Galerie Vaňkovka shopping mall, the Trinity Administrative Centre and the Domini Park; he is also appraised for his rearrangements of public spaces, such as the Moravské náměstí Square

. appointed Professor of Architecture in 2003

DOWNLOADING THE VISUALIZATION AVAILABLE AT: http://www.uschovna.cz/zasilka/EFIKIGIEGY56KVFU-SDC/S92PXUX5CY 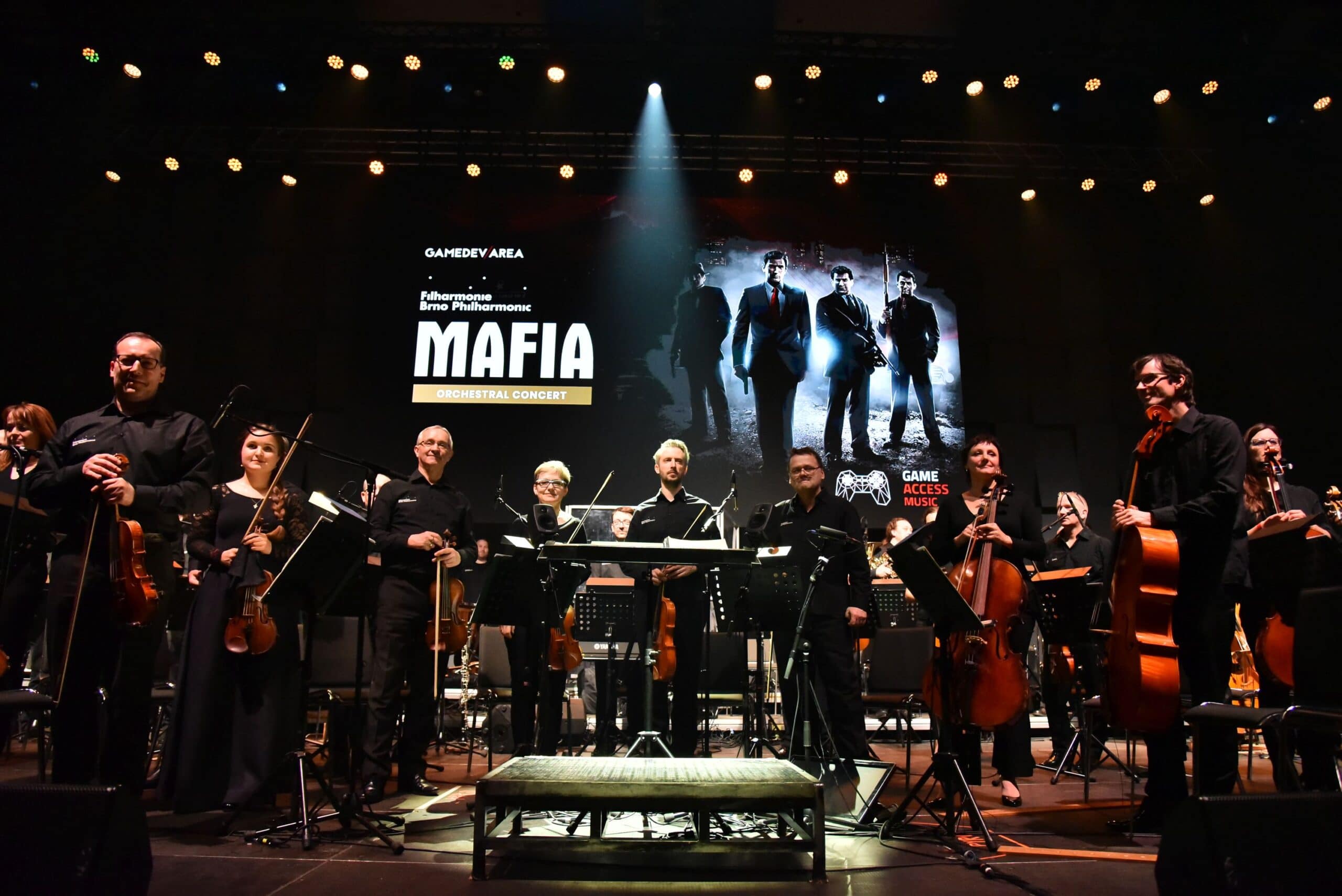