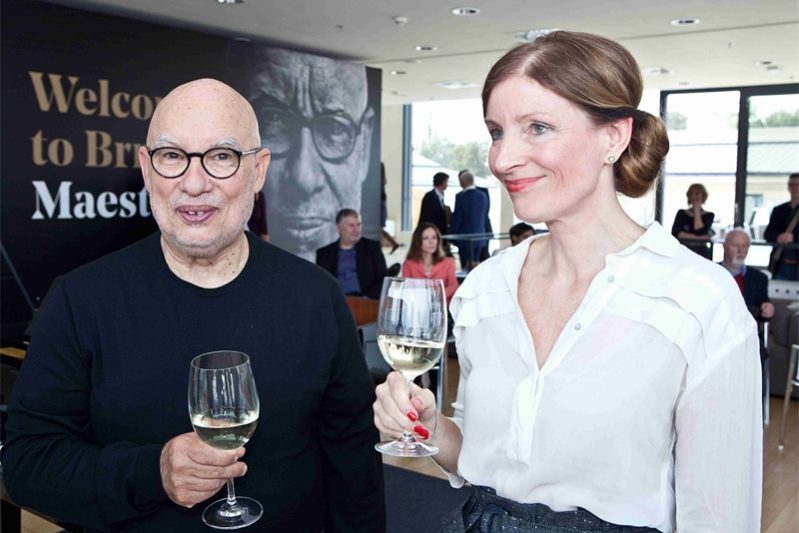 Conductor Dennis Russell Davies has been named Artistic Director and Principal Conductor of the Brno Philharmonic Orchestra (Brno, Czech Republic). Davies’ contract starts with the 2018-19 season and runs through 2022. The timing coincides with the initiation of the construction phase of the Janáček Cultural Centre in Brno, a state-of-the-art concert hall with a seating capacity of 1,250, which will become the Brno Philharmonic Orchestra’s new home and is projected to open in 2020. For Davies, who has just concluded his 15th and final season as Music Director and Chief Conductor of the Bruckner Orchestra Linz and Linz Opera, the Brno Philharmonic Orchestra appointment marks the continuation of 48 years during which Davies has held principal positions with orchestras, opera houses and festivals that have included the Basel Symphony Orchestra, Vienna Radio Symphony Orchestra, Bonn Opera and Beethovenhalle Orchestra, State Opera Stuttgart, American Composers Orchestra, St. Paul Chamber Orchestra, Norwalk Symphony Orchestra, Cabrillo Music Festival and Stuttgart Chamber Orchestra.

Davies made his debut with the Brno Philharmonic at the Prague Spring Festival in May 2017, performing Schnittke’s Seid nüchtern und wachet… (Faust Cantata), for which the orchestra was joined by the Czech Philharmonic Choir of Brno, and Gustav Holst’s The Planets. Their next collaboration will take place in Brno at the Easter Festival of Sacred Music in April 2018, in a concert that will include Leoš Janáček’s Glagolitic Mass, the world premiere of a work by British composer David Matthews, and Arvo Pärt’s Te Deum, which Davies conducted in its world premiere in 1985.

In speaking about this appointment, Dennis Russell Davies said: “I am proud to have been invited to be the Artistic Director and Principal Conductor of the Brno Philharmonic Orchestra and am very pleased to accept this invitation. The chance to explore with these fine musicians great Czech music past and present, and to bring this progressive city in contact with the many outstanding international composers and artists I have been privileged to work with over more than half a century is both an exciting and, at this point in my career, surprising development. I am intrigued by an orchestra (and a city) that understands the role it has to play in the Czech Republic and internationally, and is not afraid to be ambitious and to take risks. My American-Midwest roots make me feel close to Moravia, and my long years at home in Linz, Upper Austria, have given me a deep appreciation for our common Central European heritage. The chance to contribute to the development of the new Janáček Cultural Centre, with an appropriate hall for this fine orchestra, is a wonderful opportunity. I look forward to great music making with the Brno Philharmonic.”

Petr Vokřál, Mayor of Statutory City of Brno, said: “The Brno Philharmonic is working towards becoming a world-class ensemble. I am delighted it is strengthening its ranks with Dennis Russell Davies, a figure of indisputable international repute. His previous positions, among them Stuttgart, Bonn, Vienna and the American Composers Orchestra in New York, testify to the fact that the Brno Philharmonic will be headed by a figure universally recognized for his excellence. I wish Dennis Russell Davies much success in his work, an inspiring team, and I hope he enjoys and comes to appreciate the unique atmosphere of the city of Brno, and that Brno becomes his second home.”

“The Brno Philharmonic, as a leading Czech orchestra with over sixty years of history and with Janáček in its genes, is pleased to welcome a new Principal Conductor,” stated Marie Kučerová, Director of the Brno Philharmonic. “Throughout its past, the orchestra has gone through the era of its key founding Czech figures such as Břetislav Bakala and František Jílek, a period of international outlook with Aldo Ceccato, Petr Altrichter and Aleksandar Markovic, and has evolved into a mature ensemble aware of its original roots and ready to take on all the challenges of today’s symphonic world with self-confidence. With the breadth of his vision, his artistic and life experience, and his relationship to the orchestra and each of its musicians, Dennis Russell Davies is the ideal choice to further the artistic development of the Brno Philharmonic as it prepares for the opening of its new concert hall in 2020.”

Dennis Russell Davies was born in Toledo (Ohio) and studied piano and conducting at the Juilliard School, New York. His activities as an opera and concert conductor, and as a pianist and chamber musician, are character-ized by an extensive repertoire stretching from the Baroque to the latest music of our time. Widely considered to be one of the most innovative and adventurous conductors in the classical music world, Dennis Russell Davies has successfully challenged and inspired audiences on both sides of the Atlantic. He is noted for his exciting and well-structured concert pro-grammes and for close working relationships with many composers, among them Luciano Berio, William Bolcom, John Cage, Manfred Trojahn, Philip Glass, Heinz Winbeck, Laurie Anderson, Philippe Manoury, Aaron Copland, Hans Werner Henze, Michael Nyman and Kurt Schwertsik.

As a guest, Dennis Russell Davies has conducted such renowned orchestras as those in Cleveland, Philadelph-ia, Chicago, San Francisco, Boston and the New York Philharmonic, as well as Yomiuri Nippon Symphony.

During his tenure as GMD in Linz, the new Linz Opera House was inaugurated in April 2013, at which occa-sion Dennis Russell Davies conducted the world premiere of Philip Glass’s opera “The Lost” as well as Strauss’ ”Der Rosenkavalier”. In addition, he conducted new productions of the whole “Ring des Nibelung-en”, “Pelléas et Mélisande”, “Falstaff”, “Salome”, the European premiere of “McTeague” as well as world premieres by Moritz Eggert and Michael Obst at the new “Musiktheater”.

Davies’ work also had a crucial and lasting effect on the concert sector of Bruckner Orchester Linz by reach-ing out to modernity and new audiences, and frequent touring activity while still working on their core rep-ertoire, e.g. the recording of all symphonies of Bruckner in every version.

In 2016/17/18, Dennis Russell Davies was a guest – among others – at Gewandhaus Leipzig, Konzerthau-sorchester Berlin, DSO Berlin, SWR Stuttgart, Orchestra Sinfonica Nazionale (Torino), Orquesta Sinfonica de Galicia, New Japan Philharmonic and Yomiuri Nippon SO, as well as at the Festivals “Prague Spring” (with Filharmonie Brno) and Ravenna (with Cherubini Orchestra).

Starting with season 2018/19 Dennis Russel Davies takes up his new position as Artistic director and Chief Conductor of Filharmonie Brno. Several other guest performances for the season 2018/19 will lead him to the opera Frankfurt (Eötvös „Drei Schwestern“), the Staatsorchester Stuttgart, the Hamburger Philharmoni-ker, the Radio Symphonie Orchester Wien, the Yomiruri Nippon Symphonie Orchestra and to the Orquesta Sinfónica de Radio Televisión Española Madrid.

He is a Fellow of the American Academy of Arts and Sciences. In December 2014, the title “Commandeur des Arts et Lettres” was bestowed on Dennis Russell Davies by the French government, in 2017, he received the “Österreichische Ehrenkreuz für Wissenschaft und Kunst 1. Klasse” by the Austrian government.

Head of PR and Marketing 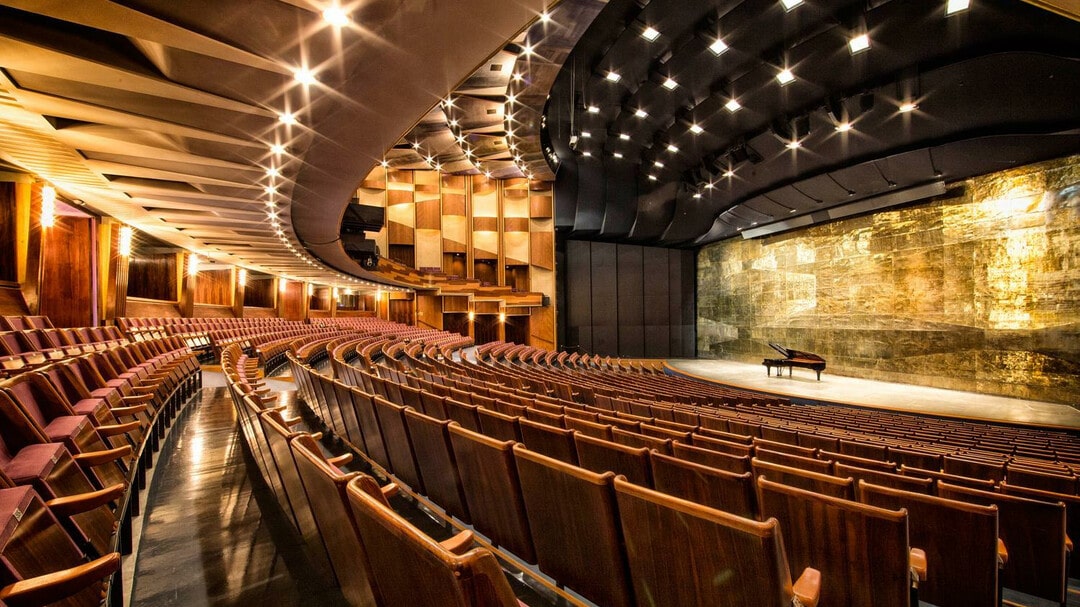